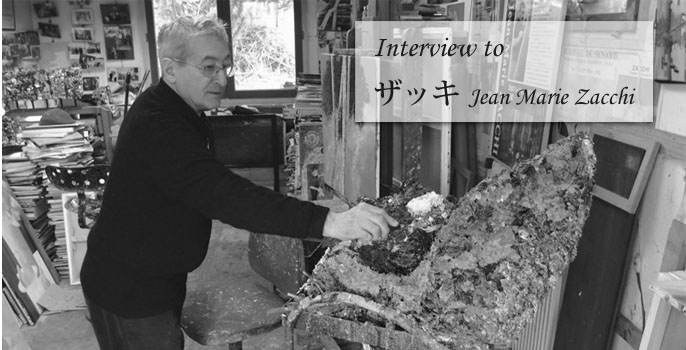 Interview in the Paris studio of Jean Marie Zacchi

V: This is your second solo exhibition in Karuizawa. What impression did you have when you first visited?

Zacchi: My last visit was eight years ago and I remember many trees, and nature was verdant and rich; it was a very pleasant place. To my regret, my stay was short.

V: I have heard that at that time, you also saw the colored leaves of autumn. In France, there seems to be many golden autumn leaves, but few turning red. Were you inspired in some way by the fiery Japanese autumn leaves?

Zacchi: Until then I mainly used blue and green, but when I came across the shades of autumn leaves and the Japanese people’s favorite colors, I started introducing red, yellow, orange, or the like, little by little. For a painter, using new colors is a serious matter, but much influenced by what I saw in Japan, I came to paint with colors that I had never used before.

V: It was an important change. What is the general theme in your creative activities?

Zacchi: It’s trees. To many people, when they hear my name, I think they have a strong image of trees, vertical lines, blue, and green. Trees mean “breathing” for human beings. I also often depict flower bouquets. I like the art of Japanese flower arrangement, too. While in Japan, I tried out calligraphy, and I was strongly impressed by the unrestrained movement of the brush. Influenced by the shading of sumi ink, I adopted the way of using the hake brush into my techniques.

V: Is there any difference between Japanese and French trees?

Zacchi: In Japan, I get the impression trees receive more care; in winter, some tree trunks are wrapped up, while in France trees are left just as they are to grow naturally. Even though they were once deliberately planted and positioned, they are generally left to grow in their natural form. The colors of trees are also different, and so is how they are planted. Then, of course, there is the well-known Japanese art of bonsai.

V: What is the theme of your August solo exhibition in Karuizawa?

Zacchi: The theme is trees and flower bouquets, but I have introduced my own new japonisant technique, very much influenced by Japan. The background of the picture is fluid like the shading of sumi ink, and colors are arranged in a way that some parts are transparent and some are opaque. Moreover, influenced by Zen, I have left large empty areas on the canvas. In Japan, the spaces of “silence” are also treated as if they are words. French people talk too much, but stillness is also a language; there is something we can understand about each other, or we can contemplate in quietness. In fact, I felt like that was a significant change for me.

V: Well, emptiness is an occasion for contemplation, and considered important in Japan. It might be a very Japanese approach.