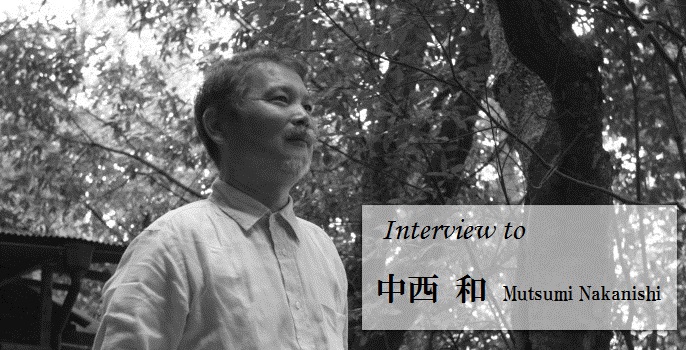 The “feel-good factor” shared by artist and spectator through the painting...


This year marks the twentieth “World of Mutsumi Nakanishi” exhibition at Gallery Sakuranoki. Nakanishi is the artist regarded by clients as the most “collectable” on our books. We spoke with him about his work.

Born in Nara in 1947, Mutsumi Nakanishi studied oil painting at Kanazawa College of Art before moving to Tokyo in 1972. Around 1985 he switched from painting in tempera and oils to an original technique of painting, followed by washing. Currently lives and works in Kamakura.

Making pictures—how it all began

While still elementary age, Nakanishi learned that there was a type of school where all you had to do was draw and paint pictures, i.e., art school. Apparently, hearing this did not so much make him decide to become a painter, as feel a sense a liberation: going to art school could be his Get-Out-of-Jail-Free card, so to speak. At high school, even when struggling with his studies, he says, he could make the excuse to those around him that it didn’t matter “because I’m going to art school.” Something his father said to a relative around this time also had a major impact on his chosen course:

“You ask whether sending my son to art school is the right thing? I’m not the slightest bit bothered about whether he becomes a brilliant artist, or makes a name for himself. As far as I’m concerned, should someone like that happen to turn up among the Nakanishis a few generations down the line, that’s plenty.”

According to Nakanishi, this revelation—that he didn’t have to succeed as a painter—only added to his sense of freedom. “This is what it was like from my early years, so I’ve never been very conscious of ‘becoming an artist.’ It is others who made me an artist.”

From glorious Nara, to the brooding overcast skies of Hokuriku: Nakanishi went to study oil painting at Kanazawa College of Art, but on seeing the oil paintings of the Western masters, it struck him that there was no way he could paint like that. Even the thought patterns of those artists were different, completely alien.

“You know in Japanese we have that word jigo meaning to amuse yourself? Doing something first and foremost for your own enjoyment: I want to maintain that as the foundation of my practice. I suppose it (his current washing technique) just turned out this way of its own accord when I went to paint whatever I, who bend in the breeze like grass, felt most attached to… I guess I’ve never had any burning ambition to be a painter, or to show my work somewhere and have it recognized.”

“How did I discover this way of painting? Let me think… The eureka moment came when my wife brought home this electric eraser from somewhere. Seeing it rotate and erase must have flicked some switch in my head (laughs)!”

Nakanishi says it was thanks to the rotating eraser that he discovered a way of rendering “white” that matched his own sensibilities perfectly. He hit upon the idea of expressing “white” not by applying white paint to represent brightness and light, but by scraping the paper, adding air to produce a “white” integrated with an airy light. His first step was to race off to a DIY store. Next, he searched for paper that would allow him to do what he wanted. This technique is very tough on the paper. Washi paper treated or “sized” to stop smudging and running would be problematic. Western-style paper or watercolor paper seemed to fit the bill. But what about grays to show gradations of light and dark? Ivory black goes moldy, and doesn’t form an attractive gray even when spread thinly. Sumi ink, which has grains much finer than those in pigment, will do the job. But if you apply sumi ink to the surface of watercolor paper, it never soaks in comfortably like on washi, no matter what you do, and never looks good. So, you have to wash it off.

“I found I could work much more easily than in oils. It’s not as if I want to show that the object is here, like this, or how things are positioned in relation to each other. My failure to paint well in oils was to do with ambience. Before, it never felt right.”

A work is created through repeated painting and washing.